The Anup Agro company was founded in Nagpur, India in 2018 by Anup Jaiswal, with the support of his other businesses all around Nagpur, following are the significant and amazing discovery: cows produce different types of milk proteins and it affect people differently.

He thought of making use of a barren land he owned in countryside, with the advantage of farmers who gave it a good green grass for fodder of cows. Keeping in mind of providing a good milk quality to people of his own city.

As he came to know that people were not getting enough of A2 milk protein and calcium and so facing bone disorder resulting in osteoporosis. Also a stomach digestive discomfort while drinking an ordinary milk.

He then gathered knowledge that ordinary cows produce milk with different beta-casein proteins type, called A1 and A2. And then he discovered there was a safe and simple way to identify cows who produced milk that contains naturally less A1 protein. From there The Matrika Milk Company was born.

Now enjoy the nutritional benefits and deliciousness of 100% real milk 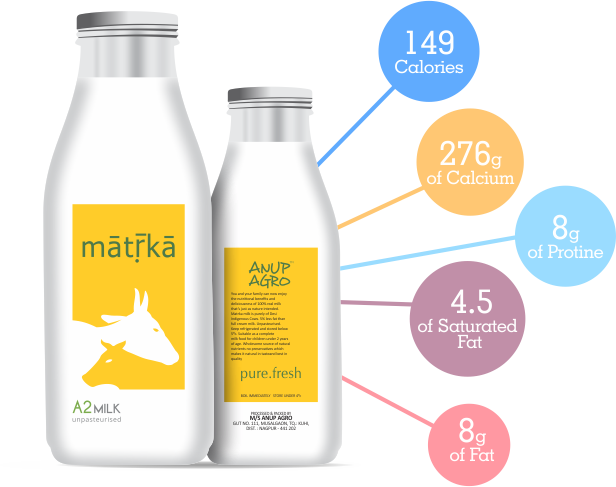 You and your family can now enjoy the nutritional benefits and deliciousness of 100% real milk that’s just as nature intended. Matrika milk is purely of Desi Indigenous Cows. Contains fat SNF. Unpasteurised. Boil immediately and stored below 5 degree c. Suitable for children under 2 years of age.

Wholesome source of natural nutrients; no preservatives, which makes it natural in tasteand best in quality.